The Review
The book cover and the blurb were the main reasons I picked up The Helpline. The cover artist has done a wonderful job in conveying through the image what the book is all about. The blurb excites the reader and forces them to ask some questions for a start.
As I read The Helpline I started answering my own questions. The story is not only of Samir. The story is of Riya, a sister who loves her brother unconditionally, and devotes many years of her life for his care. The story is of Siddhartha who suffers from Down’s syndrome but is never afraid of the challenges life throws at him and takes them in his stride. It is the story of a true friend, Neha, who stands by her friends in their hour of need. Who doesn’t care what the world says of them but pays heed to her own instincts about them. This is the story of a grandfather who devotes his life to the care of the differently abled, someone who serves as a living example of what he preaches and someone who is remembered long after his death. This is the story of Aslam who has dreams in his eyes of a better future for himself and strives harder and harder each day to educate himself so he can get that goal. It is also the story of Rajesh who is focused and stops at nothing to get to his goal. It is the story of a boy called Samir who is jealous of a girl Riya because she is so perfect and everybody loves her, even his nana. It is the story of a young Samir who falls in love yet makes some grave mistakes. But it is also the story of a writer who is driving down a guilt-ridden path, who takes out a gun every night but has enough courage to keep it back again, a writer who is trying hard to find his true identity and please his dad. Yes, The Helpline is all this and more.
I finished the book in one go. Sent a sleepless night in its pages. There are many places where the Grammar Nazi in me seared it’s head but the emotions in the story soon put it back in it’s place. I believe that if The Helpline were better edited, it could see a lot of success. But I still believe that this book will carve a niche among some readers. It’s different and You have to read it to experience it.
The Blurb
Samir is suicidal. Rachael works for a suicide helpline. Fate connects them through a phone call. And so begins Samir’s story of love, longing, errors, regret and a girl who changed his life. As his story reaches its conclusion, Rachael will know the true reason behind his suicidal tendencies. But this suicide helpline is not any ordinary service. There is more to the mysterious and yet so convincing voice of Rachael. As this new mystery begins to unfold, Samir is going to discover three things:

What is The Helpline?

What is Samir’s own identity?

Every year, several teenagers in India attempt suicide because of failing relationships, dwindling careers, parental pressure or the competitive world. This story is about one such teenager, his early problems and the hurdles to cope with them. This story is about finding hope in the struggle. This story is about fighting for what you believe in and discovering your true identity. This is not a story about falling in love. This is a story of rising from a failed love story.

Uday Mane was born in Pune and raised in Mumbai. He works as a marketing professional during the day and a storyteller during the night. He is an avid reader, and loves to collect classic books.

The Helpline is his debut novel that was launched in March 2014 at the hands of Padma Shri Paresh Rawal.

You can stalk him @

This Tour is Hosted by 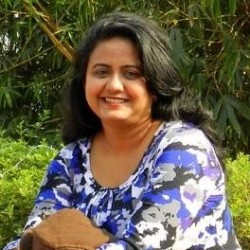 Latest posts by Dola (see all)

Let me know what you think! Cancel reply

This site uses Akismet to reduce spam. Learn how your comment data is processed.